Alongside being an acclaimed author and actor, Nakhane Touré is also officially one of South Africa’s most exciting singer-songwriters, with a South African Music Prize for Best Alternative Album to prove it. We caught up with Touré ahead of the release of his latest LP, You Will Not Die, and discussed Marvin Gaye, homophobia and his desire to make BDSM-inspired pop. 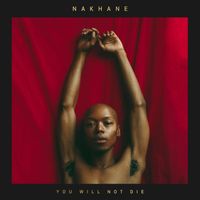 You’ve pursued lots of different creative avenues so far, as an actor, an author, and a musician. Do you have a preferred medium at this point?

They all play a different role in my life. It’s not that I don’t love them equally, but I love them differently. At the end of the day they inform each other, and when one is lacking the other one steps up and helps out.

But music was your first love?

Yeah, definitely. I call music my lingua franca. It’s the language that I learned passively; it was something that was everywhere I looked and went in South Africa. Choral music was really big where I grew up, and my mum and my sisters all sang in choirs professionally. They were all classically-trained opera singers and used to sing Mozart and Handel and all those people. So I didn’t understand the words because they were all in Latin or German or French or whatever. All I knew was melody and using my voice for singing. And if you listen to [You Will Not Die] you can hear that; the voices stacked on top of each other is because of my formative years. I used to sing myself to sleep because it was a form of comfort to me. And it still is.

I didn’t know if I had it in me to actually sit down and create my own music. I still feel like it’s a miracle.

Who were your earliest musical heroes?

Marvin Gaye was just someone I looked up to, and I still do. Because not only was he a singer who wasn’t afraid to sound slightly feminine, but he could also really imbue a line that was so simple with so much meaning. Of course, at the time I didn’t understand the meaning of the songs, and how raunchy they were or how heartbreaking they were. But I knew that they made me feel something. I remember saying to my mother that all I wanted to do was be able to sing like Marvin Gaye, and I always felt thwarted by the fact I didn’t have the range, or the tone or the maturity of voice. I always felt like I failed as a singer because I didn’t sound like Marvin Gaye.

Much later, actually. I played classical trombone, steel drums, drums, and piano, and for a long, long time I was more of a recitalist than I was a writer. When I was 15 I moved to Johannesburg and I had plans to go back to Port Elizabeth and go study classical music and start a jazz band. Of course it didn’t work out – and thank God it didn’t – because it is only later, when you become an adolescent that you start to feel a lot of things a lot stronger than you did a few years before, and you feel like you have to express something. And for a long, long time that was true. Words came first. I was working with short stories and bad high school poetry. (Laughs) Music came later. There was an ease about writing words but with music it just seemed so miraculous and monumental, and I didn’t know if I had it in me to actually sit down and create my own music. I still feel like it’s a miracle.

You won the South African Music Award for Best Alternative Album with your last LP, Brave Confusion. Were you surprised by the reception?

Yeah. At that time nobody knew who I was. I was just this little kid that had come up from the western suburbs of Joburg, with some sad songs. I was completely taken aback. It took a really long time – about three years – for the album to really gain proper traction. I guess because, at the time, for someone who looked like me and made the kind of music I made, it was not ubiquitous, you know?

A lot of the conversation around your last album was framed around your status as an openly queer man. While obviously it’s extremely important to have visibility for the LGBT community in the arts, how comfortable were you about being placed in that role as a spokesperson?

It see-sawed. I had days where I understood the importance of visibility of black, queer people, politically. And I still think there isn’t as much black, queer, trans and lesbian visibility in mainstream culture, but this is another conversation altogether where we look at the problematic nature of the patriarchy within the LGBT community. And then on the other hand I was really annoyed by people only talking about my sexuality and not the music. Because I made an album; I didn’t write a dissertation. It wasn’t a protest album either, it was art. But I understand why people needed to do that.

There has been some controversy recently around the film you starred in, ‘The Wound (Inxeba)’. Despite being nearly Oscar-nominated, because of its LGBT content it was assigned an audience rating in South Africa which was essentially a form of censorship. Is that symptomatic of attitudes in South Africa?

Completely. Our constitution is unbelievably liberal and progressive. We were one of the first countries in the world to allow same-sex marriage and same-sex adoption, so on paper we’re really, really good at ticking all the boxes. It was the whole thing with Nelson Mandela, you know, like, if you love everyone, everyone will love you. But there was no action taken on a grassroots level. Sex education in schools is still about heterosexual couples, so queer kids always felt left out and like they had to go learn these things by themselves. And then in the greater community, outside of urban spaces, people still saw queerness as the “other” because nobody talked about it. And so you see this in the homophobia in how people deal with the film, saying that it’s about protecting the culture when actually it has nothing to do with the culture other than it being about putting “true men” onscreen, participating in something to uphold this toxic masculinity that no-one seems to want to get rid of.

Let’s talk about the new record. When did you begin work on You Will Not Die?

As soon as I came out of the studio with Brave Confusion. As soon as Brave Confusion was out, it was lumped in with a lot of folk music because there was a big folk scene at the time. So I wanted to remove myself from that because I really didn’t like that scene: it was full of micro-aggressions and, not only that, I didn’t like how white it was. It essentialised everything you know? You had to have a beard, a checked shirt, a ukulele. And then people were like, “Oh my god, you’re so authentic; you’re so in touch with what real music is.” At the time it really irritated me because I was starting to get really interested in electronic music and synthesizers and my idea of what I wanted to do with music was expanding.

Anyway, I started writing for the album and I really thought it would come out the following year, but looking back on it now I’m really happy that it didn’t because in my first year of writing I was just being reactionary, making the most left-field, non-song music that you could imagine. (Laughs) After that I started looking at the new album a little differently, and it’s only after a break from music and when I finished the novel I cleansed my palette. I realise I wanted to work within the form of pop music but see how I could inject myself into that form. F**k with the form, you know? And that’s where the writing for You Will Not Die started properly.

It took a long, long time because each song had 15 versions, like, “Ok, how will this song sound as a dance song? How will this song sound as a post-punk song? What would it sound like as a piano ballad?” Then I met [producer] Ben Christophers and we started recording the album, and the songs started calcifying into what they are now. But I took away all the superfluous stuff in songs, and only focused on three things: form, melody, lyrics.

Can you tell us about the inspirations behind the lead single, ‘Clairvoyant’?

What do you think you’ve learned about yourself in the making of this album?

As a musician I’ve learned to let go. On the last album I had to be there for every single thing that happened and I had to monitor what happened. But it’s that whole thing: if you love something, give it away. And these are still my songs, and just because I collaborated on them doesn’t make them any less my songs.

On a personal level, I learned that I can be mean, in terms of some of the songs I wrote about my partner at the time. Maybe I was angry. And now they’re like, “I can’t believe you wrote this!” and I’m like, “I can’t believe I wrote this either! (Laughs) But it’s a really good line!” And he’s like, “It is a good line, but everyone’s gonna think I’m an a**hole!” (Laughs) And I’m like, “But you were an a**hole that day!”

‘You Will Not Die’ is a real affirmative message of hope. Why did that resonate as a title for the set?

Well the song is about abandonment, but it’s about looking at this really traumatic event and going, “But you know what, am I dead though?” It’s up to me to decide whether these traumatic moments define me. For a long, long time I didn’t look at things that way. I didn’t want to look at those traumas head on, and deal with them and leave them behind, because I guess they defined so much of who I was. And you get used to them, you know? It’s like a scar. For the first three months you don’t like it, but after a few years it’s just a part of who you are, and you don’t even realise that it’s there anymore, but it’s still there. But I wanted to f**king deal with it; I wanted to exfoliate it. And once I did it I was like, “Yeah, that was hard, yeah it hurt, but I didn’t die.”