Four years on from Girl On Fire, Alicia Keys is back with the most powerful album of her career. We sat down with NYC-born singer-songwriter to talk self-acceptance, unrealistic beauty standards and her hip hop-infused new direction on Here. 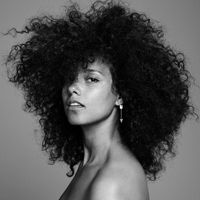 Congratulations on ‘In Common’. It’s got such a different vibe from your older work.

I love that about it. I love that it feels fresh. I love that people are even saying, “That’s Alicia?!” That happened with ‘No One’, where people were like, “That’s Alicia?!” I just love ‘In Common’, and it’s a great set-up for the album. The album itself is really talking about who we are as people, who I am as a woman, how does that relate to what we’re going through and what we’re feeling. ‘In Common’ was definitely a moment where we all left the studio that night like, “Something just happened...” And that’s the feeling I get from people when they’re hearing it too. That same feeling that was in the studio is translating to people now.

So what can we expect from Here?

You’re gonna love this album. This is the best album I’ve ever done, by far. Musically, lyrically, there’s plenty there for you to dig into and feel and go with. It’s a really varied emotional experience. You’re gonna be all the way in.

That’s an important thing to be: just blunt and honest and bodacious. Being opinionated is a good thing.

Can we expect collaborations?

I don’t tend to do a lot of collaborations, honestly just because if I do I want it to be genuine; I don’t want it to be a stunt or whatever. But there’s maybe one or two that are good and worth the wait. They bring freshness only. (Laughs)

Can you talk us through the creative process?

This album happened almost all in New York, which is the best place to write. It has the best energy, it has the right kind of diversity and it’s my hometown so I really love creating there. This [album] definitely has [New York’s] pulse, has that energy. It’s very unapologetic, the music, so creating it was really exciting, because it was different.

I call it my first communal album, and I say that because I brought together a group of four of us that were very different in style, but when we get together we create this world. That’s myself, a writer and producer called Mark Batson, a writer named Harold Lilly and my husband, actually, which we never planned but it just came together like that. The four of us really created the majority of the album and there was just this unity and comfort and this real space to have very interesting conversations and dialogues. It was the first time things happened so quickly and powerfully; we’d be in there like, “Woah, this is crazy!” It was a beautiful way to bounce off all of the intelligence and musicianship of everyone, in its different styles, and create something that you’ve never heard before but that, at the same time, feels very familiar.

There’s a four-year gap between Here and Girl On Fire. When did you begin work on the new album?

You know, it’s strange how it goes. You say four years from the last album, but when the last album was released, there were two years between that and between being finished with the album after touring, and all of the promotion. So that leaves you another – in this case – two extra years, which the first year was really about creating this next piece of work that you’re gonna hear soon. And then, I had a new baby so the next thing you know it’s been four years. It doesn’t seem like it. But somehow I’ve gotten four years younger so that’s the good news. (Laughs)

Can we talk about the impact of the ‘In Common’ video. We saw that you’ve been reposting lots of videos of fans dancing to it?

Yeah, yeah, that’s been really cool. People immediately started playing guitars, or playing on piano, or doing fly routines to it, so that was really dope and that’s why I started posting them because I love to see people’s interpretations of the song. And the video for ‘In Common’ I definitely love so much. I love everything that it’s talking about too, just really speaking about how we’re all flawed, and on our journey a little bit messed up, and that’s alright. That line where it says, “If you could love somebody like me, you must be messed up too,” that’s an empowering feeling: like, it’s not just me, it’s all of us. And you see that in the video, with these very subtle messages and implications, that who you are is perfect. I think that’s something I’ve really learned a lot lately; just being very clear about, and learning more and more how to be clear about, being yourself.

That’s a message you’ve been pushing in your album cover artwork, and in the essay you wrote recently about embracing being make-up free, because all those beauty standards are just ridiculous. That’s so refreshing.

It is. There is a lot of bulls**t in the world, there really is, and you start to realise like, “Wow, do I think that I’m supposed to look like this or dress like this in order to be beautiful? When did that start? And when did I first start seeing that?” I think that that’s a real epidemic. As women who were once girls, and as girls who will be women, there is this idea about what a beautiful woman is. But as women we are goddesses, in all of our styles and fashions and flows and looks and colours and pimples and scars, and all the stuff that we all have, everyone. That’s what makes you glorious.

Another artist who’s renowned for speaking her mind is Miley Cyrus, and you’ll be working with her on ‘The Voice USA’. That must be really exciting?

Definitely. You know what, I really do appreciate that about her. And that’s an important thing to be: just blunt and honest and bodacious. Being opinionated is a good thing. It’s interesting because sometimes when I have a strong opinion you’ll see how much people reject it and judge you, and it’s so interesting. Especially the way that social media is kind-of like a big bully in a lot of ways. It’s really interesting. At least, it can be; it’s not always that way. But I think it’s really important to have an opinion. Not to say that you always know – you don’t always know – but when you do it’s cool. You don’t have to become a wallflower that says, “What if I say something they’re not gonna like and they’re gonna maybe be upset?” It’s like, ai ai ai! Who are the “theys” anyway, is my question? (Laughs)

Have you felt pressure to conform in that way previously?

I think so. Naturally, yes. And I didn’t really realise it while it was happening. You don’t even know it’s exactly happening. I think that it’s now when I look back, and I’m like, “Man, that’s so interesting.” I found myself in a place where I personally felt very, very censored. I was censoring myself. I’d talk to people in an interview, and they’d ask me a question and I’d try to find the best way to answer it so that it didn’t offend anyone and things like that. Not that I want to go around offending everybody, but at the same time you also have to know who you are and what you feel and what you think.

So I think that there was this strange conforming that was happening and now I have a confirmation that I need to not conform. (Laughs) But I just think it’s part of growing. We all grow and usually start to discover a little bit more every day of who you are. And every day you have a chance to say, “You know, this happened yesterday and I’m not sure if I liked how that felt so much. Maybe tomorrow I’m gonna try something different.” That’s the cool thing about life: we get to keep exploring and figuring it out.

And what about gigs and performances? What’s coming up?

You know, as of right now [there’s] nothing confirmed to share. But I’ve been doing these really crazy, underground shows. I did one at the Village Underground in London and I did one in Berlin. It’s been nuts. I’ve just been really in that zone, to do these very off-the-beaten-path, underground, secret, sweaty shows. And they are so good. So hopefully there’ll be some more of those because they bring once in a lifetime energy.