In the four years since Machineries of Joy, British Sea Power have barely drawn breath, packing in a myriad of projects from documentary soundtracks, brass band reworkings and album reissues to writing fresh material. We gave singer Scott Wilkinson a call to talk about latest LP Let the Dancers Inherit the Party, and to reflect on the past 17 years of mischief-making. 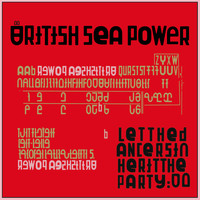 It’s been four years since Machineries Of Joy, but you’ve had loads of different projects on the go in the interim, right?

Yeah, like you say, we’ve been pretty busy. The two biggest things were that it was the anniversary of our first album, The Decline of British Sea Power, and we did a re-release on quite an ambitious scale, with some gigs to go with it. And we did a brass band-based project [Sea Of Brass] where we looked at old songs again. I don’t know why we did it now... (Laughs) I think it was just for a challenge. And we’ve done soundtracks for some documentaries and stuff like that. It’s all quite backward-looking stuff, I suppose, so it’s nice to get a new album out.

I think we just get bored easy, and someone has a silly idea and instead of saying no, everyone says yes. It’s normally quite good; you end up doing something you wouldn’t expect, and it can be pretty interesting. Gives you a bit of perspective on things and it’s quite good in a way to think about what you’ve done before and then move on from it.

How have all those different projects impacted on this new album?

It probably did in a reverse way, in terms of the film soundtrack stuff being a bit free-form in its structure and a bit experimental. You’re not really writing verses and choruses so much as it’s atmospheric, and I think we just got that out of our system for a short while and decided to do something a bit more focused and upbeat and – dare I say it – slightly more pop.

You think you know everything when you’re 19, and as you get older you realise you know less and less.

When did you begin work on this record?

Last summer I was getting ideas together, and then we recorded it in about two months in the autumn, and it was finished by winter. The final stages were produced by Cam Blackwood, who’s a Scottish nutter. (Laughs) He’s not a typical choice for us, because he’s not that alternative in his work, but he is as a person. Saying that, we’d already recorded all the songs ourselves, with no input from anyone, so the songs were all there.

Do you normally work that quickly?

No, no. Normally we put everything off and deliberate and change our minds a lot. I think we tried to reinvigorate ourselves a bit and get the energy going and get it done a bit faster. Sometimes it’s good because you make decisions and you don’t always have to rethink them and wonder if it’s the best thing; sometimes it’s best to keep the original energy, finish it, move on and do something else.

Was there anything about the creative process that you approached deliberately differently?

I suppose it sort of goes with doing it quickly, in a way. To me, at least – and I think everybody took it on board to some degree – I thought it should be a more modern album than we might do sometimes, located in the now, with what’s going on in the world and our lives and technology and production.

There’s definitely been a lot going on these past four years. How have politics fed into your work?

Yeah, it’s pretty tricky. I have a pretty strong interest in, well, quite a lot really, whether it’s politics or just technology, the way the world is, and how people live. So in one sense, I like to recognise what’s going on and let it into the songs, and I think potentially it’s a good thing for politics and music to mix but often it’s pretty dreadful, unfortunately.

The way I saw it, I didn’t want to write a record about Donald Trump or Europe or Russia or banks or something, but I didn’t want to pretend it hadn’t happened. I think I’m interested in how these things affect your normal life, and how they get mixed up with pretty lightweight things, like watching pop videos or something on the internet. Like, you could end up watching something pretty nasty or serious and the way it all gets mixed up in our days I find pretty interesting. The one thing I didn’t want to do was get depressed by it. It’s not a nice way to feel.

I think you’ve got to be careful because, if you don’t watch the news, most people are pretty nice generally, whereas if you watch the news it is just bad stuff. But it’s important bad stuff, I guess... So if anything, [this album] was a positive emotional response to these horrific things that have happened.

As you mentioned, sonically, this is a pretty “pop” set. Was that the goal from the outset?

I think it was to some degree. It wasn’t, like, an ironic pop move or anything clever; I like a lot of more serious music and all sorts of things but I like things with choruses that are three or four minutes long too. And at this point I’d rather have that, at least on the surface, and have other stuff beneath which might unveil itself over time. I don’t think this is a lightweight record, but I think it’s more immediate and easier to listen to than some of the other stuff we do.

The album title is a line from the song ‘Praise For Whatever’, right?

Yeah, well there’s a poem of the same name, by Ian Hamilton Finlay, and it’s something along the lines of people who go to a party and the people that go sit in the corner and have some grumpy conversation, maybe try and set the world to rights, get nowhere and end up feeling grumpy and fed up. And the other people who’ve gone and had a bit of a dance seem pretty happy, so maybe it’s something about participating and taking things for what they are.

Aside from Finlay, can you tell us more about some of your cultural influences for this album?

I quite like science fiction and you get Ray Bradbury, and Philip K Dick and people like that, who I can’t help but think maybe get taken more seriously as time goes by. Sometimes it’s something you just happen to hear on the radio and then it just clicks with you. This one is a pretty random blend of things; I think I’m getting the modern, short attention span.

Can you tell us more about the song ‘Electrical Kittens’?

Well, that’s the only song that was a few years old. Originally, we did this project for a film called ‘Out of the Present’ which was about Russian cosmonauts going to the International Space Station in the late 80s. We only did it twice, but we did a new soundtrack for it and performed it at CERN in Switzerland. It was quite spacey and atmospheric and the riff for that song came from that; it was just something I didn’t really want to leave behind. And with it being spacey it got mixed up with thinking about ‘Blade Runner’ where they have a lot of electronic animals because they can’t afford real animals.

You’ve got a UK tour starting in April, right? Will you be taking the polar bear outfit with you?

Erm, I’ve tried to get people to not do the bears, which could be a bad move for some people but I think sometimes you have to not do something sometimes. But people found it very hard to get the grips with the idea that we wouldn’t at least bring the black bear, because I think they’re more loyal to that one. (Laughs)

Do you have to be a certain height to wear the bear suit?

No, not really. It makes you taller. I always think I’d get claustrophobic. I don’t think I’d like it myself.

I think that’s definitely true. The polar bear has been cleaned once in four years, because we got it for the last album. It was dry cleaned. (Laughs)

Do you have any other extra-curricular projects on the go?

Weirdly, we’ve made it hard for ourselves by doing a project, scoring a potted history of Polish animation from the last 60 or 70 years, on the day before the tour starts. We got asked to be involved by the Polish Embassy and they were really fascinating things. And we’re doing music for a computer game for this mad guy called Robert, from Estonia. It’s not something we’d normally get involved in – there’s not a lot of gamers in the band – but it’s quite interesting what he’s putting together so we’ve given it a go. It’s set in this weird world and it’s got quite a strange aesthetic to it but it’s a procedural police role playing game. (Laughs) I don’t know, I don’t really understand it, but it looks really great.

How did you meet him?

You started British Sea Power in 2000. How have relationships within the band evolved in that time?

It’s probably a bit smoother, because we’ve got a couple more people now. Eamon [Hamilton]’s gone, which is a bit of a shame but he’s got things to do. We probably argue a bit less, get on better. We’ve gotten better at sitting in vans for long distances without killing each other I guess, and maybe a bit less ego-based or something. Like, there’s less of a need to try and impress everybody or tell the world how good I am. I was gonna say “we are” but that’s just cheating. I don’t know, hopefully we’re a bit nicer. (Laughs)

I think that’s true of most people when they get older – it’s a classic thing isn’t it? You think you know everything when you’re 19, and as you get older you realise you know less and less, which could be a bad thing or it could just be a good thing because you start learning from places you wouldn’t have. So yeah, I try to leave behind habits and do things differently as much as possible.