Revered Vancouver artist Dan Bejar - known best as the frontman of his band Destroyer as well as a former member of the New Pornographers - returns with an eleventh studio album, ken. Ahead of its release, we spoke to him about nostalgia, what it's like being a cult musician, and why he’s no longer an anglophile. 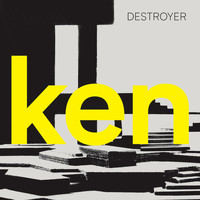 Eleven albums in, does putting something out still feel as huge as album number one must have felt?

I don't remember that very well, because it was 21 years ago. But I wasn't expecting anyone outside of Vancouver where I lived would hear it. The second one I went into a studio, but I didn't really expect anyone outside of Canada to hear that. The third one maybe a few people on American college radio heard... It all happened very gradually, kind of a natural, very small progression, so it makes you not very conscious of the world. Which is good.

Is the almost 80s sound on this album a conscious thing, or did it just kind of happen?

The thing I was conscious of when I first started working on the record was that I wanted to play guitar again. I hadn't really touched it in ten years, so I wrote the songs on guitar. And when I pick up the guitar I generally go back to my comfort zone, when I first got into listening to music - and that was in the mid-80s, late-80s. I was listening to a lot of UK bands from that era. And I think the sounds of the record kind of reflect that comfort zone.

The UK was a country where bands like My Bloody Valentine could have a song on top 40 radio - America would have to burn to the ground before something remotely like that would be possible.

Was it unusual in Canada at that time to be that into British music?

I lived in suburban Vancouver where, if you were into music at all you were unusual - so that sucked. I think if you wanted to define yourself as "different" - which is something that happens when you're a teenager - you did it through music. At the time, you would either do it through getting super into American hardcore or punk music, like underground; another way was to be a New Wave kid, and that was way more anglophile. And me, being kind of a softie and kind of pretentious, that appealed to me. I loved those bands - the sound of them, the look of them. It was the first thing I was ever truly obsessed about.

In the press release for this album you mentioned Thatcherism - would you have been following British politics quite a lot as a teenager?

I'm sure I had my ideas, but they were purely fictional - they were inventions of my mind. And I love that, you know, that's how art contorts us. It gives us these delusions which stay with you forever.

As well as the nostalgia thing, then, given the references to Thatcherism, was there politically a reason you decided to put out this album now?

I don't think so. I mean, things are dire and people want to address that. I'm not a topical writer, but I do exist in the world. To me - and I think this is a strand that exists in a lot of Destroyer records - it does sometimes sound like someone singing who is very intent on isolating themselves, or distancing themselves, or abandoning a world that is psychotic, diseased, or incredibly decadent, or murderous, violent. Those kinds of words come up a lot, and that could be seen as a political reaction to the world, not really one based on action.

In an interview you once mentioned that you listened to a Taylor Swift song because you have a young daughter. Has being a father changed how you write?

There's only one record - Kaputt - that I think is influenced by that, because I wrote it in an ecstatic state of new fatherhood. So there's a lot of tracks that sound, to me, like lullabies. In a lot of ways it's a very strange record, I don't find it very comforting even though people say it is. I don't really sound like my young self now - I don't write like that anymore. I can't seem to write as many words as I used to.

Speaking about the words, lyrically you can be quite absurd and cryptic. Do your words have some deeper meaning to you?

I just thought I sounded like an old man describing a depraved world - it doesn't seem like Syd Barrett lyrics or anything like that to me. I write in an unconscious place, and maybe that seems absurd to people. I labour over the music, whereas the words come very fast without me really knowing where they come from - but when I string them together, they have to hit me in the gut, give me some kind of emotional reaction. I do like lightness - light or comical images that are somehow degraded - and I like taking that kind of image and putting it next to an image that could be sublime.

You've said the album title, ken, comes from Suede's demo title for 'The Wild Ones'. But also "ken" can mean knowledge.

The way I thought of it was, yeah, the scope of one's understanding, the field of one's vision. I don't know if these songs fit under that. I would never explain an album title but in America I was made to feel so ashamed and panicked about choosing the word "ken" as a title, because everyone made me think that it would be received as an album about Barbie and Ken dolls. I can't not address this, so I had to tell the story of finding out the original title of one of my favourite songs. It’s this grand, melodramatic, tragic ballad that's so romantic, with the title 'The Wild Ones' which is perfect, and doomed-sounding - so I was into how the original title could be "Ken", which is so little and modest sounding. It actually made the song ten times more interesting for me. There was this mysterious tale to the song that no one had ever really thought about, and more than just Suede it made me think about the power of language. How it can utterly transform things. I also like the sound of the word, I could picture a John Osborne play called "Ken".

If you're interested in kitchen sink dramas too does that mean your interest in British culture goes beyond music?

Not anymore. It's a fallen culture. I haven't been interested in a British thing in a long time. It's okay for cultures to fail, America's fallen too. And also the things that I love pass. Look, there's always gonna be good things that come out of everywhere, but part of being a teenager in suburban Vancouver and romanticising and idealising a place had to do with the fact that the UK was a country where bands like My Bloody Valentine and The Fall could have a song on top 40 radio - in America, the country would have to burn to the ground before something even remotely like that would be possible. So obviously it was elevated in my mind to a place that is much higher than the reality of it - for all I know, it's this drunken, violent place where people are singing Wet Wet Wet songs all day, right? Who knows? I mean, I'm sure there's bands I would love, but as far as looking to the radio and popular culture and finding something I'm into? That's not gonna happen. But that's partially cos I'm old.

Have you found it surreal being a cult singer? Your fans have a drinking game for your music...

I try and distance myself from those terrible nerds. (Laughs) I have to close my eyes and pretend they don't exist. You know, I don't think about it too much. It's been such a slow, casual progression. My life has changed, but that's not really based on my musical success. I feel really lucky that I can still do this, that I've been doing it for that long. I feel like I've won the lottery.

Is there anything else you think people ought to know about you?

They already know too much.