Following four albums of infectious, inventive, fidget-pop, Marple’s finest are back with their fifth long-player. Here, Dutch Uncles frontman Duncan Wallis explains how Blossoms, Brexit and the departure of a band-member all played a part in influencing Big Balloon. 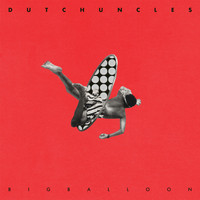 Yeah, it’s going well. Usually, when you’ve got an album coming out, you’re behind with all your deadlines in terms of getting videos finished and the whole album packaged. It’s only taken five albums, but we are actually on top of things.

You must be one of the most prolific British bands about. What drives you?

It’s an interesting one because it’s slightly changed with this last album. Over the last three albums, I feel as if we’ve been knocking at the same door for quite a long time, always trying to break through and to tick off the same couple of boxes. So I think there’s a slight frustration to that, but it’s kept us going. That’s the more general reason but this time round I think the drive was slightly different. There was a dark side to it because our guitarist Sped left the band a week before the last album, O Shudder, came out. We didn’t want people to feel like that was the beginning of the end for us, so that did spur us on in a bizarre way to get writing album number five right away.

And then at the same time there were moments on O Shudder – portraying ourselves as a band – that I certainly didn’t feel comfortable about. We’re not really a band; we’re more of a proggy pop project. But at the time it felt like, “Why are we a band that has an album out that we can only play four songs live off, because everything else is just so airy-fairy?” So as soon as that frustration kicked in – and that kicked in very early on, certainly for me – we knew straight away that whatever we did next had to complement what we’re good at doing live, which is having quite an abstract aggression and fast, punchy songs which aren’t obviously about one thing or the other. We wanted to bring some of the riddle back, which we had in an earlier stage of our career.

That winning/losing mentality shouldn’t be there. Post-Brexit that’s a real problem.

In terms of reference points, do you listen to other people’s music while creating, or do you have to completely cut yourself off?

I suppose you cut yourself off from what’s going on in music right now, but there are certain things you can’t help. You know, we’ve all got favourite playlists, and music that we listen to without even thinking about it. I remember listening to quite a lot of late-80s Wire, because I really liked how bizarre the lyrics were. I had no idea what the songs were about but I loved them, and I felt like, if I can feel like that as a fan, then I can do that to people who like our music. Hopefully. (Laughs) Robin [Richards], the chief songwriter, was partly inspired by some proper old dad prog. But if you start worrying about where you sit with everyone else making music then you’re probably never going to get a finished product.

Lyrically, you were looking to the political climate for inspiration this time, right?

Well, sort of. In the world outside of music, everything just seems to be getting worse. And I don’t know, it’s a curious thing because there were some moments on this album where I wanted to flex a more socio-political muscle in terms of my writing.

There’s a song on our album called ‘Same Plane Dream’ which is one of the more politically-inspired songs. It was about the Tory government and the way Iain Duncan Smith was insistent that people could live on £53 a week. It reminded me of a bit in Nietzsche’s ‘Thus Spoke Zarathustra’, in Zarathustra’s insistence on the super-human and the fact it’s something that even the preachers can’t really practise.

There was a particular passion for me to get that out there because my uncle had died a couple of years back. He was in his mid-50s and he died on benefits, at a time when there was a lot of aggression towards people on benefits because that’s who the Tories were blaming at the time for everyone else’s ills. So I felt like I wanted to put across just exactly what people like my uncle’s position was. But it takes some personal aspect for you to be driven by it all.

Are there any nerves about tackling politics in music?

The problem with doing political writing for bands is that there’s so much red tape about when your music comes out. So I could write a song about the political situation right now but you wouldn’t hear it for another nine months and in that time it could already be gone. Also, when musicians get too politically direct it just immediately becomes preachy so I think you have to comment more about how people’s ways of thinking have changed. But you know, let’s not kid ourselves, I don’t think music’s ever going to change the world. First and foremost it is entertainment.

Some artists are deliberately releasing uplifting music to give some respite from bleak news.

That’s a good idea. I mean, it’s very war-time. During the war, musicals were on the up and up, to get away from all the sh*t. Actually, one of the themes I wanted to explore on Big Balloon was escapism, because I kind-of wanted to escape all that and make an album that was all about some sort of fantasy. But I’m not sure it’s the way to go. And I also think of how good Morrissey was at talking about how crap life up north was during Thatcher’s rule, and I still think that’s probably the best way to go about music tackling a situation; with social-political commentary. But one really good current example is Wild Beasts’ ‘Alpha Female’ single. It’s really well-timed with the women’s march and everything that’s going on.

We’ve been around long enough to not be in fashion, and then be in fashion for maybe half a year, and then to go out of fashion again. My position when we were writing it was all about the psych-rock tagline we started seeing attached to every new band that was coming out; any band that had a chorus pedal or a phaser suddenly had long hair. And it was just like, “Well, first of all, I can’t grow my hair that long and, secondly, this is BS.” It felt as if the industry, once again, was just taking control, making sure that a few bands were going to rocket whilst everyone else was really in the dark, because they don’t want to present too many different ideas at once.

So, for us ‘Big Balloon’ was just us being like, “Sod it, we’re not psych but this is what we can do.” And the lyrics were me saying, “Prove to me that it’s worth being a hype band.” That winning/losing mentality shouldn’t be there. Post-Brexit that’s a real problem. There’s this winning/losing mentality in British politics, which is f***ing horrible. That aside, comically, ‘Big Balloon’ was inspired in a weird way by Blossoms. Just because obviously we’re both from Stockport, and it was funny watching them blow up. I’m really pleased for them; I’m glad to see them having such an amazing journey, and they’re well grounded about it all. For the record, there is no maliciousness in ‘Big Balloon’, it’s just where the trigger was for me.

When we spoke to you in 2013, around the release of Out Of Touch In The Wild, you described yourselves as outsiders. It sounds like you still feel that way?

Yeah. I don’t say it in any smug way. I just can’t really think of any bands that are quite in our position, just getting on with it. It’s always weird to hear people say, “Oh yeah, your contemporaries Wild Beasts and Metronomy and Everything Everything.” It’s like, you’ve just named three massive bands. (Laughs) We’re not a massive band. It’s so strange when festival season comes round and the kinds of offers we get are so varied. So I don’t know, in that sense everything is so random that it’s very hard to feel as if you’ve got anything in common with other bands.

You’re also one of very few bands to make it to album number five. That’s quite an achievement, don’t you think?

It is a very rare thing. And it does show determination, if nothing else, certainly. I think we’re at a slight advantage where Robin is able to bring such detailed ideas from step one of writing a song. If we were in a practice room trying to jam some ideas, or find the groove or anything like that, I think we would have probably give up about two albums ago. But luckily we are able to see a finished product pretty much straight away.

How long have Dutch Uncles been together now?

Well, the four of us have been playing music for 12 years, all in all. And the other three – Robin, Andy [Proudfoot] and Pete [Broadhead], they’ve been playing music together since year six, so they’ve been doing it for nearly 20 years now. In fact, when they were in year five and I was in year six, we were at the same primary school, and I remember them actually being in a band called Flower Power. I think it was for the talent show or something, and they were doing a Super Furry Animals cover, or something like that. I remember them playing it in the classroom, and me putting my head around the door. It’s so weird to be that much in each other’s faces at that early stage.

How have your motivations for making music changed since you started out?

Well, when you first start out you want to be absolutely huge, don’t you? You want to be the next big thing. I definitely sense that over the course of our five albums our drive has certainly changed somewhat in terms of the fact that you start to know what’s possible and what’s not possible. I think for me now, the drive really is that we want to make an album that sounds like our band name suggests – just make a really good piece of music that is going to be relatively timeless. Whether it’s successful at the time or not doesn’t really matter anymore.