Two years on from Ratworld, Leeds duo Menace Beach are back with another album of deliciously scuzzy guitar-pop. Here Ryan Needham explains how a trip to Ibiza, an ex-member of Add N To (X) and a compendium on the occult found in a charity shop all helped shape Lemon Memory. 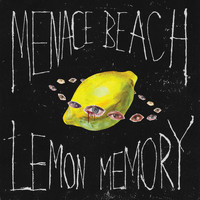 Hi Ryan, where are you today?

I’m at home. We’ve just been doing a little run of in-stores, playing record shops. So that’s been cool, driving around the country in our little van, doing stripped-back shows and meeting a load of people who’ve bought the album.

How are the new songs going down with audiences?

I mean, it’s been more about us learning them, because we finished the record a few months ago and we haven’t played them live. So we’re relearning bits, going, “How the hell did we make that noise in the studio? Can anyone remember what pedal I used?!” Just figuring that stuff out. But yeah, it’s good. The proper tour starts next week, and then I think there’s 14 gigs in 17 days, so it’s quite intense but it’s not crazy.

I’d like to pretend I’m too cool to read my reviews, but I totally read them.

You must be pleased at the warm critical reception Lemon Memory has received?

Yeah. I’d like to pretend I’m too cool to read my reviews, but I totally read them. (Laughs) I don’t need validation or anything like that, but it kind-of decides on how much fun you’re going to have for the rest of the year. (Laughs) You know, because you get a couple of nice reviews and then suddenly you get an email saying, “Do you want to come play in this country?” So they are important in terms of opportunities, but I don’t lose any sleep over them.

Do you ever take on board constructive criticism?

Not really. Sometimes reviews back up things that you’re thinking, like, “The songs are all really dense,” and with that you go, “You know what, that’s kind-of right.” I don’t know, to some extent you probably take in any sort of feedback. My biggest critic is my mum, basically. She just goes, “I can’t hear the song,” and I’ll go, “Maybe I’ll put slightly less feedback in there.” (Laughs)

What does your mum make of Lemon Memory?

She’s not really mentioned it. She likes the songs that Liza [Violet] sings...

Well, I think it’s not as noisy as Ratworld, and I think everything is a bit more subtle in terms of the songwriting. We wrote these songs as a record, whereas the other album was made up of songs we had knocking around, some of them for years. In terms of songwriting, Liza took the lead. People have said that Lemon Memory sounds like a totally different band and that made me realise that it is literally as simple as the fact I wrote most of the first record and Liza wrote most of this record. So yeah, I think it’s a little bit more expansive, a bit more considered, and I guess it sounds a bit more mature, but not in a boring way.

How do yours and Liza’s creative processes differ?

She approaches it like work, really. She’s more into sounds and textures, just piecing songs together, and she likes to write a good lift, whereas I’m more disorganised, I guess. And at the end of the recording, she’s very much, “That’s done.” Like, I wouldn’t be surprised if she hadn’t listened to the record [since we finished recording], except maybe to learn a couple of bits we’d forgotten. She just moves on. She’s already cracking on with the next thing now. So she’s all about the process and I like the end result.

Also, I haven’t done as much on this record in terms of recording. I’ve done some vocals but guitars and keys I’ve played very little of on it, so I feel like I can listen to it a bit more objectively. And I was able to be a bit more brutal with some of the edits and suggestions in the production.

And you went to Ibiza to write the album?

Well, we went there after touring the first album, just to go on holiday really. But then there was a guitar shop nearby and we borrowed a couple of acoustic guitars and just wrote ‘Give Blood’ and ‘Maybe We’ll Drown’. We didn’t go out there to write, but those songs ended up being the first couple of the record, and it went from there. It was a different vibe to sitting in a bedroom in West Yorkshire, definitely.

Why did you choose Ross Orton to produce the album?

Ross played drums in a band called Add N To (X), and when Liza found that out, she was like, “Right, we’ve got to work with him.” He played in Jarvis’ band for a while, and he’s made a Fall record, and he’s done an M.I.A. album, and he just seemed like a good guy really.

We’d met him a couple of times, just from hanging out in Sheffield. Nick [Chantler] – who’s playing guitar with us now – knows him, and Ross recorded the Drenge album and we’ve been hanging out with those guys in Sheffield too. We figured we could just go and live with Nick for a couple of months and make an album; just get out of Leeds really.

How did his approach differ to that of previous producers?

Often when you go into the studio, you build songs from the drums up, but with this album it was like, “Ok, we’re doing this song today.” So we’d go into the studio and the room would be empty, and we’d just set the drums up, tailored to that song, and then we’d record it and that song’s done. We’d then take everything out of the room – almost like we were getting rid of any evidence of the energy of that song – and then we’d start again. You could really focus on that one song, and I’d never worked like that with any producer, in any band I’ve been in.

Lyrically, Lemon Memory has been described as a pretty anxious record. Would you agree? And where were you looking for inspiration?

In places, I guess. Touring is good because you get the run of the nation’s charity shops, and Liza found a book called ‘Mysterious Cults’ that became a creative jumping off point for lyrics. It was a big compendium, covering the history of the occult, magic, Aleister Crowley, witch trials and all that stuff. It’s been done to death but I’ve never really looked into that stuff before so we got into that, pulling out ideas for lyrics.

Is that where the album title comes from?

Yeah. That’s In this book there was this lemon curse you could do where you bury a bag of lemons on the property of your enemy and it gives them bad luck. I said to Liza, “Do you remember when there was a carrier bag full of lemons that someone had thrown into our garden? What if that was a curse?!” I’m sure it was a vandal on the way back from the market, but it got me thinking, like, if you were cursed what would you do? We just got carried away with it.

Was there any evidence that you might actually be cursed?!

Well, it was a pretty weird house. It was always full of mice, like all the time. It was an odd group of people, and there were always things cracking off...

Is there anything you’ve learned about yourself in the making of this album?

I’ve learned to be fairly cool with not doing that much and letting other people take the lead. I’ve been in bands where it works by committee, and this one person has this vision and then everyone else has got to chip their idea in because they want to be involved in it as well, and then the original idea – which could have been great if it had been allowed to have been seen through – just gets watered down. I think Liza had a very strong vision with that record, and because I’d done most of the songwriting on the first album I just decided to leave her to it. So I’ve just learned to sit back a bit and not be too precious. I guess I don’t have as much of an ego. I don’t need to be singing or playing on everything, and I don’t need to be stood at the front of the stage. Just to be part of something that’s great is enough really; you don’t have to be up front and centre.