Blending the complexity of math-rock and the heaviness of post-rock with the fragility and intimacy of folk music, this group from Athens, Georgia, are one of our favourite discoveries of 2016 so far. We sat down with frontwoman Kristine Leschper and guitarist Drew Kirby to find out more about Mothers' roots and to hear the story behind their spellbinding debut. 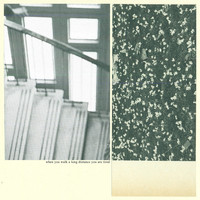 How long have you been writing music, Kristine?

Kristine Leschper: I would say that I’ve been seriously writing music since about early 2013. I had a guitar off and on since I was an early teenager, but I was never super-dedicated to actually learning how to play it. Basically, starting college reinvigorated my interest in guitar and songwriting, and I became more confident in my abilities to do that. Moving to Athens from Atlanta was a huge part of that because so many people play music there, so it really made me more serious about doing it.

When did you form Mothers?

KL: So, originally, the band was a three-piece. Me and Matt [Anderegg, drums] and Drew [Kirby, guitar] met in 2013, around the time that I was starting to make music. We were all playing in different bands, so we knew about and respected each other, and thought it made sense to work together. It was just this very organic process because Athens is a very small town: you know everyone who plays music on some level, and collaboration between musicians just happens there. So we actually started working together in November of 2014 and then we went onto make this record in December of 2014, so it was a really quick changeover. Patrick [Morales, bass] joined us a bit later, so we got a friend to record bass on the album.

Initially, songwriting for me was discovering this way to say things to people that I'd never had the confidence to say.

Presumably you bonded over some shared musical tastes?

Drew Kirby: Back then we were listening to a lot of Hella.

KL: Yeah, I was really interested in a lot of noise-rock at the time.

Drew Kirby: Chad Vangaalen too, so that’s obviously two vastly different projects. But I think we came to realise we had a lot of common ground all over the place in music taste, not just that we were into technical, math-rock bands or really pretty, slow music.

How has the creative process evolved? Do you write collaboratively now?

KL: Now we’re all working that way, yeah. For the record, we had to work so quickly to get everything written in that month-period before we recorded, and most of those songs I had written well before that so I’d been performing them for quite a while solo. So there was a skeleton there as far as what I wanted the song to be like, and then it was just this process of very carefully orchestrating the space that the songs would exist in, and carefully adding arrangements that wouldn’t take away from this minimalism and starkness that I was using in my writing.

‘Copper Mines’ was the first band song, I would say. That was the first song that we really went into that I didn’t already have a structure for. I had riffs and some different guitar parts and different vocal ideas but it wasn’t a song yet. So that was the beginning of us working collaboratively, which is the way that we’re trying to work now.

Your song structures feel quite fluid. What drives that?

KL: I think some of it is related to us being pretty interested in technical music, but I also think a lot of it is this enjoyment of the organic nature of music, and the ebb and flow.

DK: There isn’t actually much moving time, and when it seems like there is it’s really a trick.

KL: It’s really about having everyone on the same page, and really paying attention to what everyone else is doing, and altering the tempo. It’s an organic thing.

DK: Having a lack of a template or a rigid structure seems to make a little more sense if you’re trying to make things intuitively. So I don’t find it jarring: it’s like forward motion.

Thematically, it’s a pretty dark record, and your decision to sing in the first person lends it a diary-like feel. Is it autobiographical?

KL: For the most part, yeah. I like to talk about very specific experiences that I’ve had, that can also relate to more universal feelings. It’s this idea that anything that you’ve felt has been felt by someone else before and it’ll be felt again: that this is not this solitary thing. I write very specifically but sometimes it’s very exaggerated for the drama of it and the poetry of it. So, I would say that it’s mostly autobiographical but it’s in order to reach this other destination.

What’s the story behind ‘Too Small For Eyes’?

KL: I was finishing my last year of college when I wrote that song, and I was working on my thesis for art school which actually shares the same title. Because I was working on those two things simultaneously, a lot of the themes in my visual work also bled into the imagery in that song. My thesis work was about gender roles and constructions of masculinity and self-discovery, and the challenges that you face when dealing with your body and what it means to be inside of your body. So a lot of those themes carried over, as far as self-loathing and self-doubt and not really knowing what kind of person you are. But I would say it’s also about betrayal and self-doubt, and also self-learning. And interestingly enough, even though it’s a pretty transparent song, it’s also about hiding aspects of your personality and the need to conceal things to feel safe.

You appear to address some difficult relationships on the album, particularly on songs like ‘Lockjaw’.

KL: Yeah. Initially, songwriting for me was discovering this way to say things to people that I’d never had the confidence to say, or never had the right means to say. And so it was almost this way to get retribution for my injuries, and this active retaliation where I was able to be really honest, and kinda mean, to people who had wronged me or I’d felt wronged me. That song specifically is about a toxic relationship and the empowerment of moving forward and being bigger than it. And there are several songs on the record that are that way, not necessarily about romantic relationships, but interactions with other people.

What do you hope listeners take from the album?

KL: It’s a very personal look into the mind of a young person who’s very much trying to work out how to deal with being alive, and so I just hope that people can approach it with an openness and curiosity. There are things I don’t love about the recordings, just because they’re so old and that’s what happens when you listen to something that you made a long time ago, when you were really young and still figuring things out. But I still feel very attached to it and it is very much like a snapshot of a moment in time: it feels like a journal. So I can look back on it and listen to it and appreciate where I was at that time, and how much I’ve learned since them.

DK: When I think back on how quick and intense the whole process [of recording this album] was, I’m shocked we survived. And I do think that Drew Vandenberg, who produced the record, is a huge part of that. I don’t think we could have made that album at that time without him guiding us along, because we were all freaking out. It was a lot to handle, trying to put it all together almost on the fly.

We are really proud of the album, and I would never want us to give off the impression that that isn’t the case because I think that’s a lot of the record’s appeal – at least for me – that it is stuck in that moment. It’s so from the gut because we didn’t have time to even practice. I like listening to it for that reason, because it’s shocking how similar the things we play now are to those initial ideas. It was like splattering paint on the wall and somehow it turned into something that resonates with us still.

KL: I think the fact we were so rushed in the recording actually worked to our benefit. And that’s something we’ve talked about a lot, like, what if we had waited to record those songs now, how different they would be? And we’re all in agreement that we’re really glad that we did it when we did, because we were able to capture us discovering what it was in real time. We had this very improvisational aesthetic because we didn’t really know what our identity as a group was.

Have you begun work on material for the follow-up?

KL: Yeah, I think we have most of the material for our next release written already, which is kind-of a weird place to be.

What can we expect from it?

KL: I would consider it an expansion of this record in the sense that it’s more dynamic: there are songs that are incredibly quiet and there are songs that are much louder and heavier and more abrasive. We’ve learned a lot about working together and how to collaborate. So where this record is so much from my perspective as far as the music in it, this next release is very much from the perspective of four different songwriters. And so I think it will be stronger for that reason.

KL: Lots of touring and hopefully recording our next release. We’re all very active songwriters so we want to be making stuff, and that’s something we’re trying to figure out – how to be creative on the road and keep writing.