On Austra’s third album, Katie Stelmanis examines “a world without borders, where human compassion and curiosity drive technological innovation rather than profit.” In conversation the day after the US presidential election results were announced, Stelmanis explains how Mexico City and Massive Attack inspired Future Politics, and tells us where she’s finding hope here in the real world. 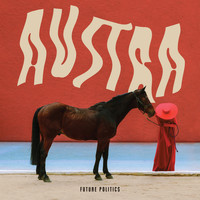 How are you feeling after yesterday’s election result?

I’ve been pretty traumatised and pretty terrified. I think it’s the first time, in my millennial life, I’m feeling major uncertainty about the world. At least in Canada, I’ve had like a pretty secure life, for the most part. I was totally shocked.

The press release for the album states that Future Politics “asks each of us to remember that apocalypse is not an inevitability, but the product of human decision-making.” With that in mind, how inspired was it by the prospect of President Trump?

This really all came together before the presidential race. And, I mean, to be honest, the presidential race seems more like a reality TV show than something I would write a record about in this way. Originally, I started writing this record feeling a very deep and personal sadness about the environment, and then I was reading a lot around it and made all these connections between capitalism and the environment. I basically realised that there isn’t one government in the world that’s capable of dealing with the environmental catastrophe that is ahead of us.

As the record progressed, I was able to get a lot more optimistic about things by kind of reading all these books, including sci-fi and fiction about the future. There are a lot of people that have like quite complex ideas about what the future could look like and what the possibilities are and, to me, that was kind-of like a light at the end of a tunnel that sometimes feels like it’s completely marred with hopelessness.

Completely radical possibilities for the future are kind-of what I find inspiring.

What did you read that made you optimistic?

Well, the specific text that inspired the title Future Politics was the ‘Accelerationist Manifesto’. These two British guys [Nick Srnicek and Alex Williams] wrote that and a book called ‘Inventing the Future’, which also inspired the album. I guess the ‘Accelerationist Manifesto’ is this idea that technology will free us from capitalism. Eventually, in the future, all labour will be mechanised and there will be no scarcity in the world and therefore, there won’t really be a need for money. It’s just one idea, but they actually provided a lot of evidence of how it could work and how we’re already getting there.

Completely radical possibilities for the future are kind-of what I find inspiring. I mean, I definitely feel like people are starting to realise [that] the only way forward is radically. I think there needs to be radical change because the status quo – which was used quite often in this election – has obviously been completely rejected. Unfortunately, there’s been no mobilisation on the opposite side of someone like Trump to combat that with a more positive vision.

Are you feeling hopeful for the future?

Yes, I do feel hopeful. I think that, yes, Donald Trump’s election rejected an old system that people think doesn’t work anymore. And while it sucks that, right now, the liberal or whatever system is just too fragmented to come up with a better alternative, I think that that can definitely change. I think what’s really important is figuring out how to shape that different future or that better alternative, and having discussions all the time about what it should look like and how radical it can be.

I see it being like a global youth movement: it’s going to have to be something that everybody connects with everywhere. I feel like it has to rise up from the bottom on a global scale, and I feel like culture and the creative world has a lot of power. Like, in the 60s and 70s with the whole free love, peace on earth, hippy movement, it was quite radical at the time but totally informed the mainstream and changed the way that countries are governed and the way that people think on a mainstream scale. I just think that needs to happen again. There needs to be some kind of movement that completely changes the way people perceive the world, like major paradigm shifts.

So how soon after finishing up touring your last album, Olympia, did you begin work on Future Politics?

I feel like I’ve only not been touring for a year, but I would say I stopped touring heavily at least two years ago. I moved to Montréal and was living there for the first part of the writing process. You know what Montréal is like in the winter: it’s very cold and dark and sad. I decided to live a little bit further out and I ended up just being totally isolated for a few months. That’s when I was going through all these feelings of sadness, loneliness and depression, and also contemplating the collective sadness of our generation. And then I decided that Montréal was too dark, so I just bought a one-way ticket to Mexico City.

I don’t know. I had never been to Mexico, but I’ve always had this feeling that I’d really like it. I think I put something on the internet, like, “I’m thinking of going to Mexico City for a couple of months,” and all these people were like, “Oh, my God. It’s the best.” And it’s now, like, my favourite city in the world. It’s so good.

That total change of environment must have been inspiring.

Yes, absolutely. First of all, it was my first time living anywhere outside of the American empire, and just sort of feeling and seeing the effects of American policies, and how they view American culture in general. And the other that’s interesting is that I find in Canada there are still lots of indigenous people but they aren’t as present – at least in Toronto – as they are in like other places in Canada. But in Mexico City the dominant race is the indigenous race and so their colonialist past is still very, very apparent. They actually learn about it and discuss it, and it’s woven very deeply into Mexican history, whereas in Canada they just pretend it never happened or that it was totally fine.

The first thing that inspired the earlier songs was that I played a show in Belgium with Massive Attack. I had never seen or paid much attention to them, but I watched their show and it was the best show I had ever seen. And then I became obsessed with them, so I was listening to their first albums a lot.

Also, when I was in Mexico, I was introduced to this type of music I never knew existed, called electro cumbia. It’s something that a lot of producers are doing in Latin America, where they take indigenous folk music and mix it with electronic beats. I was just out at some like a dance party and I heard it and I literally turned to my friend and I was like, “What are we listening to?!” I hadn’t heard something that was new to me in a really long time music-wise, and so it was all I could listen to for a while. I think it influenced the record in that I got really into slow music. So, many of the songs on this record are around 90/100bpm, whereas I’m usually in the 124/130 range when I write.

For the first record you worked alone, and on the second it was collaborative. How did the creative process work this time round?

This one was pretty much me again. I don’t know, I felt a deep need to reclaim my independence after the collaborative album. I mean, other people contributed, but for the most part it was just like a solo project. I even did all the engineering myself just because I didn’t want to have to be in a studio, dealing with the stress of thinking about how much money it was going to be. I wanted the full flexibility to go really deep with myself and also to do, like, 500 vocal tracks if I wanted to.

But was it difficult not having someone else there to say, “Ok, enough”?

I just personally feel that I do way better on my own or, at least, I think that I needed to access a certain level of feeling comfortable on my own before I’d be able to collaborate again. I mean, I also mixed [the album] with Alice, our band’s live engineer, who also happens to be my girlfriend, so it was a very intimate process. I was involved in every single aspect of it the entire time, figuring out how to do it. It’s like I had to achieve something. Now, knowing all that, I feel like I would be able to collaborate again.