California-formed punk-funk outfit !!! (pronounced Chk Chk Chk) are back with a career-beating fifth album called Thr!!!er. Here singer Nic Offer shares his “Thriller theory”, explains the inspirations behind the new record and reflects on how his motivations for making music have changed in the past 16 years. 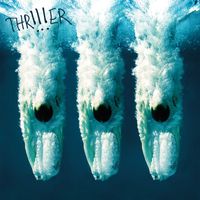 So why did you choose Jim from Spoon to produce Thr!!!er?

We just felt Spoon made the best records. I mean, there’s nobody I can list as a contemporary of theirs; they stand alone. And I liked that their songs were always a unique sonic composition, y’know? There’s interesting instrumentation behind it, and it feels like they get really original sounds. And there’s space in it too. Space and and interesting sonics is what dance music’s about right now, so they all seemed like things that would really work for us.

Whenever we told people that we were recording this with Jim from Spoon they were like, “Woah, that’s a good idea.” Like, you know, “I should have thought of that first.” So it just seemed like it would work, and it worked.

What do you think he brought to your sound?

He’s just good. In our press release it says he helped us think about the music in a different way, and get different sounds, but the thing is we were always trying to get different sounds but we weren’t good at doing it. He helped make it happen. And he’s very organised and structured, and I think we were more scattered in our approach before. I mean, there’s six of us; we’re gonna argue. We need someone to corral us, like a coach or something.

I don’t really have any other skills; I was a sandwich maker and a babysitter, that’s what I did. So I guess this is a career...

But the band’s bi-coastal, right? So how does the creative process work for you?

Yeah, there are three of us in New York, so Rafael comes over to my house and we kinda do it John and Paul style. And we’ll still send stuff on email too. And then I’ll go to California and jam with Mario, and we’ll sift through those jams.

With this record, especially, all the songs were demos and then we presented them to the band and jammed on them together. I don’t think we’d ever done demos before this album. So when everyone’s saying, “Why is this record better?” it might well be because of the demos.

Is everyone saying this album’s better than your previous ones, then?

We genuinely really like the album. Did you have any specific musical reference points?

I’d kinda stopped listening to albums and was listening to dance singles instead, and I think that’s what led it to be so varied. I just got tired of listening to dance mixes; I would find myself not paying attention. But when it was a whole bunch of singles next to each other, the differences made them stand out and made me listen more. And everything I was listening to was from the last five or six years. A lot of British stuff, like Ramadanman, Martyn, Jamie Jones, Disclosure… And then that Romare EP was f*cking great.

I mean, I always listen to a lot of contemporary music, but this was a lot more intense. And I feel like there are parts of songs that feel Stones-y or Chic-like, but that’s only because I’ve always listened to those records and I know them.

We heard you describe the record as a “return to your roots”. How so?

Well, when we said that, we were making fun of that. (Laughs) It’s just that thing that everyone says. If anything, we pushed ourselves to go further than we ever have. The only thing that was “a return” was that we did what we jokingly kept calling a “punk dog tour”; y’know just touring around in a van and playing tiny shows in shitty clubs and basements, like the early days, to get the songs tight. Everything else was going forward.

It was just a joke. Basically, every record that every band ever makes is them trying to make a ‘Thriller’; something that enters that ‘Thriller’ status. That was the game we would play sitting around the studio, like, “George Michael Faith is the white man’s Thriller, Kick by INXS is the Australian Thriller.” It’s the album that has all the hits on it.

You know, I don’t believe that. And I don’t know why people think this. It’s what all the critics think, but I really don’t get it. It’s just because you had to hear What’s The Story too much. Definitely Maybe only has three or four good songs for me. (Laughs) But I like the first two records, like everyone else. Other than that I’m a Blur guy. Blur’s Thriller would probably be Parklife. The self-titled one had a lot of hits on it too. But y’know, you can make several Thrillers.

Good news, because if you’ve already made your Thriller, where do you go from there?

You make Bad. (Laughs) We’re gonna be fair game for the critics on the next record, and they’re gonna make all sorts of bad puns, I’m sure. But hopefully we’ll just make our second Thriller.

Do you have a favourite track on the record?

‘Even When The Water’s Cold’ is the one that all the band loved initially. It was funny, we played this game: Rafael sent me an instrumental and a completed version. So I worked all night on the instrumental, wrote all the lyrics and vocals, and then listened to his version. It was a really fun and exciting thing to do, a bit like a competition; whose version is going to better?

The funny thing was, we’d both kinda written them about swimming, and I liked his and he liked mine, and we didn’t know what we were going to do. And then we were sitting in Spain in a hotel room, smoking joints, listening to both versions, and we just like, “Let’s just make your part the chorus, and my part the verses and the ending.” And then, there it was.

But they really are all my favourites. They are. I mean, when your mother says that each child is her favourite, she really means it, y’know? (Laughs) It’s just that some are less well-behaved than others. But so far this album hasn’t come out, so none of them have misbehaved yet.

Right, how was the Coachella Cruise?

F*cking fantastic. The sound was great, and Pulp’s gig was one of the best I’ve ever seen. It was well curated and it was really fun to hang out. I think it was a little undersold, because I think a lot of people were cautious, like, “Is this going to be fun?!” Yeah, it was fun! Everyone had a blast. Although I did notice that all the bands partied later than the audience. I think the audience got up early to lay by the pool or something…

There were lots of extra-curricular activities too, like wine-tasting with James Murphy, bingo with Grimes… Were you approached to host any special events?

Yeah, they wanted me to do an exercise class… I didn’t wanna do that… (Laughs) People think that since I’m onstage with the band I’m comfortable with stuff like that, but I’m able to hide behind the music onstage and I prefer that. Like, at weddings they always want me to do a speech, and I have never ever given a speech; I don’t wanna f*cking do that, y’know?! My brother’s the one who always gives the speeches at weddings and he kills it.

You’ve been doing this for 16 years now. How have your motivations for making music changed?

There was definitely a different focus when we started. We had really high ideals; we were really into Can and post-punk and stuff being a bit arty. I think in your 20s you just really think you’re gonna change the world, and that just with our attitude we could open everything up, create something new. And I guess a few grains of sand were moved but I think we had to face some harsh realities.

And now? I guess we don’t think we’re gonna change music but we definitely still wanna create our own space in it and there’s that same dedication to creating something fresh and new. I feel like I’m much more idealistic as a musician than most musicians my age. So many older musicians are still listening to what they were listening to 20 years ago and it stops being exciting. We’re still as hungry as we were for new music. And there was more focus on this record – and more desire and drive – than there ever has been.

Why do you think that was?

I think because all the reviews told us we were finished. So we said, “Well, if we’re gonna be here, there needs to be a reason for us to be here. We really need to put up or shut up. This just can’t just sound like a disco-punk record from 2003, it needs to have a reason to exist in 2013.” So we just worked as hard as we could to find something else, to find things that sounded different.

What would you like to achieve ultimately in your career? Do you even view this as a career?!

Well, I did wear a suit for this interview! I see it like this: I’ve made it a long way without a job. And when the band breaks up, I will probably have to sort out an alternative within a few months. Y’know, I don’t really have much of a savings fund, and I don’t really have any other skills; I was a sandwich maker and a babysitter, that’s what I did. So I guess this is a career. At least, I don’t have anything else I can call a career.

As far as my goals, I was talking to someone recently about how musical economy has changed. The only thing you get from being in a band is that you get to be in a band. So you better wanna be in a band. That’s all I wanna do. And because when I try and think what I’m gonna replace it with it’s like, “Am I gonna start acting? Start writing? Go into painting?” Whatever’s second to music, is actually like 10th: I don’t wanna do anything else. I would like to want to do something else, because nobody’s that good that old.

Yeah, he’s the one that’s still good. But is he? What was the last record I listened to by him? What was his last album that was as good as Rain Dogs? Rain Dogs is his Thriller. Right?