Hailing from Norway, Ireland and Brazil respectively, Guro Gikling, Richard Flynn and Luís Santos met while studying music at Paul McCartney’s Liverpool Institute of Performing Arts. A few years on, they’re signed to Domino imprint Double Six, and twisting disco, funk and soul into exciting new shapes. We caught up with the trio to hear the story behind their self-titled debut. 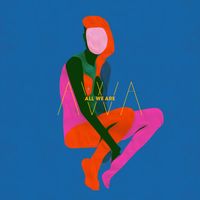 The three of you met at the Liverpool Institute of Performing Arts. Were you living in the UK previously?

Guro Gikling: No, we all moved from our respective countries to go to university.

Rich O’Flynn: We had all finished school, and were looking for some way to go over to the UK and get involved in the music scene over there, so we figured studying music was the best thing to do.

GG: Yeah, but I think we bonded more over going out to clubs and concerts, and having jams after the shows.

RO’F: We have a lot of common ground, like we listen to a lot soul and hip hop, particularly 90s West Coast stuff. We have lots of separate influences too, which means we all bring something different to the table.

The general idea is that if we can’t all agree then it’s two against one.

Did studying at LIPA alter your creative approach at all?

RO’F: I don’t think so. I think what LIPA did was just bring us together, and give us a great environment to jam in. We’ve always loved jamming and writing tunes together, and that’s never really changed from the outset. Though, we actually started the band when we finished university as a way of staying together, because we’re really good friends.

Did you have any famous guest speakers visit you at LIPA? We know Flea from RHCP has been in to teach students bass in the past.

GG: What?! We had Alan Rickman... (Laughs) So he didn’t really teach us much about music.

RO’F: We had the manager of Oasis too, Alan McGee.

GG: Yeah, that was pretty cool. And Jamiroquai were there too.

Why did you choose to stay in Liverpool after LIPA? Was it the musical community?

RO’F: Yeah! That’s pretty much the main thing that’s great about Liverpool. It’s a really small scene but it’s just packed full of really creative people. There are loads of great bands, and everyone gets involved, either musically, or by putting on nights, or making videos, or whatever. It’s a really great scene, and we’re really, really proud to be a part of it.

GG: It’s also really nice because a lot of the bands that we’re friends with are all starting to push out of Liverpool, and we’re very supportive of each other while we’re doing it. And it’s really nice when we meet people from home, when we’re touring around Europe.

RO’F: We’ve definitely put our roots down here. We consider ourselves a Liverpool band.

Ok: “Bee Gees on diazepam”. That phrase appears in probably every single piece about you. Where did the description come from?

RO’F: We self-released ‘Utmost Good’ about a year and a half ago, and our producer just coined the phrase. It’s just so apt for that song, and the description stuck. You know, when you’re a new band, it’s really great to have something that’s so identifiable. Obviously, there’s a lot more to our tunes than just that, but we still really like it.

For the benefit of anyone new to All We Are, what can they expect from your debut?

Luís Santos: We consider the album to be a very organic experience. During recording, we made sure to all play together in the same room, and our producer [Dan Carey] was in the room too, so he was just included in the performance.

I think they’re just really special tracks. There are no repeated sounds on the album; even the loops and the delayed sounds are going through different machines and effects pedals and synthesisers, and crazy 50s and 60s gear. It’s ever changing, so we see the whole album as a journey. Hopefully it takes people somewhere and they find it interesting.

What attracted you to work with Dan Carey?

RO’F: We went to a couple producers leading up to the album, and we went in with Dan to record ‘Feel Safe’ to see how it would work. He just understood us immediately. We spent a day and a half cracking that tune and afterwards we felt like we’d known him for ages. Also, he’s great at capturing atmosphere.

How does the creative process work between the three of you? Is it totally democratic?

GG: Yep. All the songs start with us going into the room with a few instruments, and jamming to see what comes out. We try to follow every idea that we have.

RO’F: And when we jam, we jam for ages – going into a completely different headspace – so melodies form naturally. Even when it comes to writing the lyrics – which we also do together – we always find that they’re already written by the time we actually come to writing them.

GG: Obviously, we do argue as well! If someone really believes strongly in one idea and someone else might not think it’s the best thing, we keep going until everyone is happy. But the general idea is that if we can’t all agree then it’s two against one.

How many tracks on the album came down to a two-versus-one showdown?

RO’F: It’s more about specific ideas within a track, rather than the track itself. But we usually just try everything, and then see what works best.

Can you tell us more about the lyrical focus on the record, please?

GG: All of the songs are quite intimate, and it’s not always just about being in relationships. ‘Feel Safe’, for instance, is about addiction; not necessarily to another person or a substance or whatever, but it definitely has a deeper theme I think.

LS: We like to explore the darkness within ourselves, and that idea of intimacy.

RO’F: Most lyrics come from a personal place but we tried to make them universal, so people can take from them what they want.

Which track on the album means most to you?

GG: ‘Something About You’ is very meaningful for me: the way it was recorded, the way I felt when we wrote it... Thinking about it is making me a bit emotional!

LS: Personally, I’m quite into ‘Stone’. We recently made a video for it and I really like the way the imagery and the music complement each other; it really takes me somewhere. I also love the way the song progresses. It’s quite unconventional and the way we wrote it was quite experimental. We had lasers and smoke machines and stuff, and yet it felt really natural.

RO’F: I didn’t listen to the album for ages – just because I needed to give it some breathing space – and I’ve only recently returned to it. I’m finding myself drawn to different tracks this time around, so it’s constantly changing. But I think ‘Utmost Good’ was a really important track for us. Not because of the recording process as such, but because it was the first thing we self-released. I really see it as the moment where we found our sound; it defined us as a band from there on in.

RO’F: Yeah, we’ve got our headline tour coming up and then that’s finishing at the end of March. Hopefully we’re going to be busy with loads of gigs and festivals all year; we just want to play the record live as much as possible.

Where would you like to be this time in 12 months?

RO’F: We should be writing our second album, hopefully.

RO’F: Maybe we should just follow the summer around?! (Laughs) The whole thing has been a really great experience so far. I mean, it’s been a year since we signed for Domino and Double Six, and we’re just so appreciative of everything that’s happened, and really, really enjoying writing and releasing songs. So hopefully we can just keep doing that.